Richard Manton, who was the grandson of Freddie Crouch, Harrold’s last blacksmith, has provided a fascinating account of the characters and conditions of the day. Because the smithy was situated next to the school, it was a source of interest to generations of children, and a meeting place where the old and out-of-work gathered and exchanged news.

Before the peace of the countryside was broken by the advent of the internal combustion engine, the sound of the blacksmith’s hammer striking work on the anvil would have been one of the few sounds to compete with that of the church clock. There was the spectacle of overheated iron sparkling in the forge like a child’s firework, and that characteristic ammoniacal smell of singeing horses’ hooves when they were shod.

When Harrold lost its village blacksmith and smithy on the village green in 1941, it was the end of an era. The village was deprived simultaneously of a well-loved character, and one of its central features. 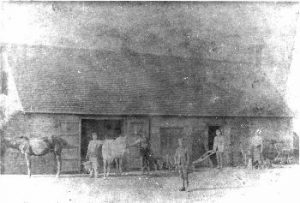 The Old Smithy in the late 19th century