It had been just another weekend. Sunday night came around too soon as usual. With the children safely tucked up in bed, Jen and I settled down to watch the telly when I realised I was out of cigarettes. ‘I’ll just pop down to the Oakley Arms for a pack’ I said to Jen. It must have been about 8.30pm when I walked into the pub on that June evening in 1968. When I got into the bar I bumped into a gentleman who turned out to be a chauffeur. He told me I should go through to the Lounge. Looking around the Lounge everything looked the same, the same décor, the piano standing by the fireplace, the same crowd! Then amongst my friends I spotted a very familiar face, suddenly the place that I was in was very extraordinary. It was Paul McCartney chatting away like he had lived here all his life. It was like a dream but the distinctive lilt to his voice was unmistakeable.

Apparently he was on his way back to London from Leeds accompanied by Peter Asher. In order to break the journey, they were in the habit of getting a map and sticking a pin in it and then going to the place where the pin landed. That night the pin hit Harrold.

When I got a chance to talk to Paul I told him that we had been born in the same hospital, I am just 2 months older than him! With that he told me to come over to the piano and sit beside him, while he played a few of his songs. At one stage he joked that I should run my fingers over the keys as if I was playing.

He then announced that he was just finishing a new song and would like to play it for the first time in public for us. The song was ‘Hey Jude’ which was released in late August that year and went on to be one of the most successful singles for the Beatles.

The inevitable autograph had to be dedicated to my daughter Judith (Jude), written on the only paper I had available – a ten shilling note.

The ending – I went home to tell Jen what had just happened. I had popped out for a packet of cigarettes at 8.30pm, by this time it was midnight. I will leave you to imagine the reaction when I told her that I had been delayed because I had met Paul McCartney!!! 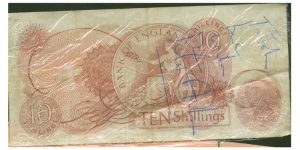 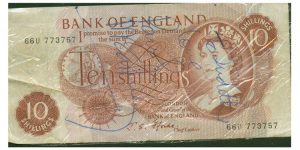 (However, John has neglected to say that he had two little pieces of evidence that should prove his alibi that evening – two signed ten shilling notes, one to John from Peter Asher and the other with love to daughter, Judith (Jude!) from Paul McCartney.)