The earliest crossing at Harrold was a ford, which connected an ancient (possibly prehistoric) route from Pavenham and the old village of Chellington, to that which ran northwards towards Irchester. The ancient road through Chellington was superseded by the present one which passes between the parishes of Carlton and Chellington.

A bridge is first mentioned in documents dating from 1136-46, which refer to “three acres of my lord’s meadow next to the place of Harewold bridge”. It improved communications between Bedford and Northampton, with a significant effect on the road system and nearby settlements.

Harrold Bridge has several distinctive sections: six arches over the river, then on the south bank a short causeway, and a further nine flood arches across the flood plain.

The foot causeway runs parallel with the road. Historically, various individuals and bodies were responsible for the maintenance of different parts of the bridge, which resulted in different structures over the years, and of a variety of styles. In about 1630 responsibilities for maintenance were defined as “four high Arches, the first Sir Richard Chetwood, the second the Earl of Kent, the third and fourth the Lord Mordaunt. The one and thirty arches of the Long Bridge the County repairs”. The individuals were lords of the adjacent manors of Odell, Harrold, Carlton and Chellington, and they were responsible for the first four arches from the Harrold bank. 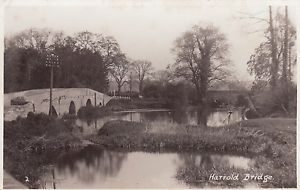 The remaining parts of Harrold Bridge, previously in private hands, were taken over by the County in 1930, and major structural repairs to the bridge and causeway were carried out by Bedfordshire County Council between 1986 and 1992.