The Covington family can be traced back in Harrold to Elizabethan times when William Covington  was born in the village in around 1593. There were  Covingtons in other parts of North Bedfordshire, including Bedford and nearby Turvey and, of course, in the village of Covington just across the county border in the Kimbolton part of Huntingdonshire.

We know little of the early life of William in Harrold or of his wife, but a son George was born in 1617 and sadly died that same year. In November 1618 a second son William was born and eventually  there were three more children, Joan, Hannah and Robert. The family all grew up in Harrold and in 1639 William was married in nearby Pavenham to Ann.  Within the first few years of this marriage Ann died and, sometime in the 1640s, William emigrated to America (this coincided with The English Civil War). 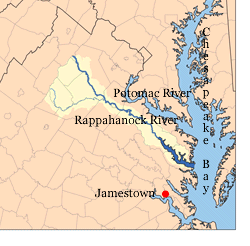 We know that he was transported to Virginia as an indentured emigrant and that his transportation had been arranged by brothers John and George Mott. He arrived in Old Rappahannock County of the colony of Virginia (now known as Essex County). The Mott brothers were agents in recruiting and shipping colonists for Virginia and for this service they received a patent for 15,564 acres of land on waters draining into the Rappahannock River on 17 October, 1670. This was for 313 indentured workers known as “headrights”. William’s name was on that list and so too was the name of Thomas Howerton (born in England around 1640 and shipped to Virginia in the 1660s.

Thomas and William became partners and William subsequently married Dorothy Howerton who was probably Thomas’s sister.
William and Dorothy Covington raised a family. Thomas and William were obviously involved in the tobacco trade because in 1670 they purchased a small part of the Mott plantation for 3,000 pounds of tobacco. Originally this was for 300 acres, but by 1683 the partners had together acquired 1000 acres and they then divided this up by an “Agreement between Howerton and Covington to divide land from Mr. Mott. Howerton to have land on the south side and Covington to have land on the north side of Dragon Swamp”( 4th April 1683). The Dragon Swamp is also Known as the Dragon Run; it is a stream which flows into a tidal tributary of Chesapeake Bay. In 1607 it was first explored by Captain John Smith and became a popular area for settlement in the 1640s by what are still referred to in Virginia as the Cavaliers.

William Covington’s will was made in 1696 and proved the next year when he died at the age of 77.  He left the plantation, which by then included a mill known as Covington’s Mill, to his three sons. A daughter and a grand-daughter each received a cow.

William Covington was probably the first person from Harrold to set foot in the New World. His arrival in the 1640s was just over 20 years after the Pilgrim Fathers had made their epic journey to New England and when settlement in Virginia was in its infancy. Other members of the Covington family later came from England. Nehemiah Covington from the Huntingdonshire village of that name arrived in the 1660s.Today there are more than a thousand names of the direct descendants of the Harrold branch stemming from “William Covington the Immigrant”.  Genealogical records based on primary sources such as wills, land registration, state and county records and family bibles, etc. show the spread of these Covingtons through the states of the USA over 13 generations. A random sample of 62 of these Harrold descendants (all those named William Covington) have revealed that they were born in 12 states of the USA:
Virginia 37%
Tennessee 19.5%
Texas 11%
South Carolina 6.5%
Alabama  6.5%
North Carolina 5%
Missouri 5%
Kentucky 3.5%
lllinois 3.5%
Maryland 1.5%
Mississippi 1.5%

Within this single branch of a family is the story of the making of America – early settlements in Virginia and the Carolinas, wagon train migration to Tennessee and to Missouri, and military involvement in the Revolutionary War the Mexican War, the American Civil War (on both sides)  and two world wars. Between these major events ordinary people were involved in farming, setting up businesses, missionary involvement in the churches, public service, academic life and, even, rocket science.  The Harrold branch of the Covingtons certainly played its part in the foundation of modern America.