A member of the CHELLINGTON TEAM MINISTRY 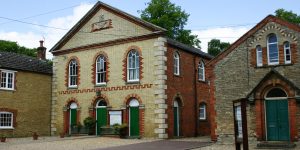 CHURCH SECRETARY:  Shared by the Elders.

1100 am every Sunday except every second month a Joint Service is held at St Peters Harrold, and 4 times a year the church joins with the other 7 churches in the Chellington Team Ministry for a UNITED SERVICE at 1100 am in one of the member churches.

Click on Service Times under Chellington Team Ministry for details.

HISTORY OF THE CHURCH

A chapel was built on the site of the present Sunday School and opened on 25th September 1808. The next year a Sabbath School was opened for girls, twenty of whom attended on the first morning. The school offered an opportunity to learn to read and soon afterwards a boys’ school was established.

In July 1811 the Rev Isaac West was installed as the first Minister of the Harrold Independent Church, as it was then known. The Rev George Bull Phillips came in 1828. Interestingly, his only daughter, Mary, preserved her father’s diary which only came to light after a great grandson, Charles Stewart of Carlton, died in 1954.

With an increased congregation, a new building was put up on the same site in 1836. Soon afterwards an Anglican churchman offered to sell his adjoining two houses and garden to the Chapel Trustees. The garden was consecrated as a burial ground. Dr G Dean became Pastor in 1862 and planned the enlargement of the Church and Sunday School. The tenders were:- for the Chapel £391/10/8 and for the Sunday School £223/10/-. After seven and a half years Dr Dean resigned to become Professor of Mathematics at Spring Hill Congregational College, Birmingham.

From 1851, worshippers were asked to choose their seating and they paid a quarterly subscription according to their means (pew rents). Thus with all the seats allocated, the Church had a stable income. By 1898 more space was needed, so the Rt Hon Earl Cowper gave land at the rear where four new classrooms, a new vestry and kitchen were built, costing £620. The opening in 1900 was a great occasion with a marquee in Watch Park, tea, special singing and speakers. Harrold was then considered to be one of the best equipped chapels in the area. In 1908 a famous American, Dr Len G Boughton, preached at the Centenary Celebrations.

The two world wars, the impact of the internal combustion engine and the deaths of many staunch supporters made church life difficult. The Rev Raymond Jubb (1955 to 1966) was the last full-time minister and the large manse was sold upon his retirement. The churches at Harrold, Olney and Yardley Hastings were grouped together, but in 1978 split up again and went their separate ways. Harrold members voted to become part of the newly formed United Reformed Church – a union of the Congregational Church and Presbyterian Church of Scotland.

In 1981 the Rev Stephen Harris was appointed one third time Minister. The Sunday School hall and two classrooms, not being used much, were rented out, thus providing additional income for maintenance of the buildings. After lengthy discussions, it was decided to upgrade the old vestry and other areas, rather than take out the pews in the Church to make it a multi-purpose building. Special Services were being shared with the Anglicans in Harrold, Carlton and Odell. More space was needed again so the unused front gallery was made into a youth room.

When the Rev Roger Whitehead was appointed on a quarter-time basis in 1994, the caretaker’s cottage at 116 High Street was refurbished to provide a family manse. In March 1998, members voted to accept the Elders’ recommendation to take out the pews and organ – a fortuitous action as extensive deep-seated dry rot was subsequently discovered. Eventually, extensive renovations were made which included disabled facilities, a new kitchen, gas heating, new wiring and lights, creating a multi-purpose building which will not need expensive maintenance for some years to come.

The space, thus created, enabled the chapel to be used for a variety of different functions. It is now a venue for many village events and is used by many different organisations The founding fathers of the Chapel would be impressed by the active use made of the buildings they founded almost two centuries ago.