Harrold Hall was built 1608-1610 by Francis Farrar for £160 for his daughter, Anne Farrar. According to the accounts in the Wingfield Trust Collection, it was built on the grange yard of the priory to the south East of St. Peter’s Church. The principal front faced the river.

It was originally an E shaped house (typically Elizabethan) built of rubble stone with an ashlar dressing. In June 1608 work began on digging stone from a pit in Harrold. This was probably rubble stone, the better quality stone being brought from quarries in Olney and Warrington (some 70 loads). Special stone came from Weldon in Northamptonshire, from the quarries of the Master Mason, Thomas Grumbold. This was used for the porch, some windows and for top stones. Three storeys high, the house had mullioned and transomed windows, moulded string courses dividing the storeys. The entrance porch was the full height of the house and would have been the most ornamented part of the building.

Anne Farrar married Thomas Boteler in 1602 when she was 15 years old. She and her husband lived at Harrold Hall for only a short time for Thomas was knighted and they moved to the family seat in Biddenham. In 1651 Helen, granddaughter of Sir Thomas Boteler, married her second cousin, Thomas Farrar, and the property, exclusive of the rectory, formed part of the marriage settlement. In 1680, when there was another intermarriage between the Botelers and Farrars, William Farrar (son of Thomas) married Mary Boteler and the rectory and other lands in Harrold formed part of her dowry. In 1714 said William “ alienated a messuage and land in Harrold” to Anne Joliffe, half sister of Jemima, wife of the Duke of Kent, who at that time owned the Manor of Harrold. The son of the Duke and Duchess of Kent bore the title of Earl of Harrold.

When Anne Jolliffe died in 1732 she left Harrold Hall to her niece, Ann Mead, who died in 1763. After Anne’s death the house was occupied by various people, including MPs, Masters of the Oakley Hunt and others. In 1816 the porch and recessed centre were obliterated by the addition of a large two storey extension between the two wings of the E shape, built by Thomas Alston. Before this, many of the original windows had been replaced by sash windows.

The Latter Days of Harrold Hall
It was leased to other individuals until in 1930 it was left derelict. The Jacobean staircase and the interior were stripped and the gates were removed to the Mansion House at the end of the village. They bear the Alston Coat of Arms. The Staircase is now in the former rectory, now St John’s Ambulance Headquarters, in St John’s Street, Bedford.

In 1938 the house and surrounding land was conveyed to local resident Edgar Clayson.

During the Second World War the Hall was used as army billets and became a prisoner of war camp for Italians, in the main. It was Camp Number 611.

In 1950 the house was sold by Edgar Clayson and was let to various tenants.

We recently received an e-mail from Bill Benton-Evans whose wife (nee Crossland) was one of the last inhabitants of Harrold Hall. She lived there, as a teenager, with her parents in the 1950s right up until 1959 when it was demolished. We were delighted to receive the two photographs below which show the Hall in relation to St Peter’s Church (circa 1955) and a picture of an impressive Elizabethan fireplace taken at around that time. Bill also sent copies of pictures of the Jacobean staircase and The Drawing Room

Today, all one can see of the original house (which was demolished in 1959) and garden is the aconites which bloom in profusion at the end of Hall Close. They were on features either side of the drive to the house. 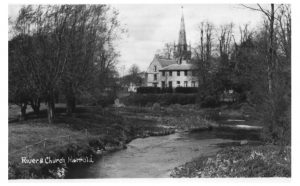 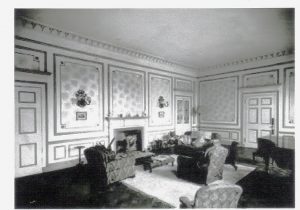 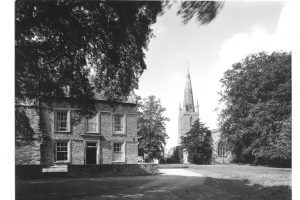 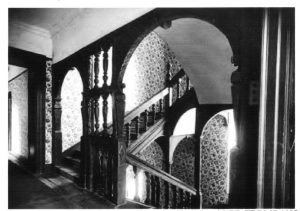 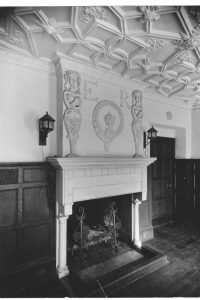 Ownership and Tenancy of Harrold Hall: A Timeline
1537 – Dissolution of the Priory, John Cheney (a 21 year lease)
1558 – Site and Land of former priory acquired by Ralph Farrar (a London grocer)
1560 – Death of Ralph Farrar site inherited by Francis Farrar
1608-1610 – Harrold Hall constructed by Francis Farrar( for his daughter Anne who was married to Thomas Boteler)
1616 – On the death of Francis Farrar the house was inherited by Thomas Boteler.
1625 – Hall leased to Margaret Mordaunt (daughter of Lord Henry Mordaunt of Turvey)
1653 – Hall leased to Sir Oliver Boteler of Sharnbrook (18 year lease) on behalf of his daughter Ursula who had married George Orlebar of Hinwick.
1671 – Leased to Richard Orlebar, son of George and Ursula Orlebar
1690 – Death of Richard Orlebar
1702 – Mary Boteler ( daughter of William Boteler) inherited the property. Her husband sold it to Anne Joliffe
1732 – Anne Joliffe who had lived at the Hall for 30 years died, leaving the property to her niece, Anne Alston (who later married Dr Richard Mead).
1762 – Death of Anne Alston who died intestate – the property descended to her nephew Sir Thomas Alston of Odell
1777 – Leased to Mrs Henrietta Lee, wealthy London heiress.
1797 – Tenancy taken over by Lieutenant Colonel Garstin (who had married Henrietta Lee).
1816 – Leased to Colonel J H Lethbridge
1844 – Leased to Major Richard Magenis
1864 – Death of Richard Magenis.His widow Mrs Magenis takes over the lease.
1865 – Leased to Edward Marsh Harvey
1869 – Following his death his widow, Mrs Harvey, takes over the lease
1885-1898 – Rowland Crewe Alston inherits the Hall and is resident.
1907 – Rowland Crewe Alston sells the Hall to Arthur Cecil Beck MP,
1912 – Alston family repurchase the Hall (Alexander Alison Alston of Turvey Abbey)
1914 – Rowland Alison Alston takes up residence
1924 – Leased to Captain Esme Arkwright
1938 – Hall and land conveyed to Edgar Clayson
1943 – The Pioneer Corps take over the Hall for billeting.
1944-6 – Hall becomes a POW camp (Camp 611) mainly for Italion POWs.
1950 – Edgar Clayson sold the Hall, house then unoccupied
1950s – Series of tenants  (see article above of a teenager at Harrold Hall in the 1950s)
1959-1961 – House demolished and the houses of Hall Close were built on the site.