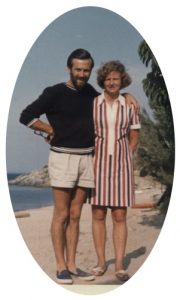 This account was published by Gordon Mitchell whose family provided the hospitality to Paul McCartney and friends on that glorious summer evening nearly half a century ago and is still warmly remembered by both hosts and visitors.

On the balmy summer late afternoon of Sunday 30th June, 1968, I was pottering in our garden at Mulberry Lodge in the High Street. Five young men, accompanied by a large Old English Sheepdog, stopped at the gate and asked me the way to the river. One was instantly recognisable as Paul McCartney.

I observed that they did not go towards the river, but presumably, having spotted the Magpie sign, decided that they preferred to drop in and refresh themselves with Mrs Matthews’ (the landlord’s wife) beers. My wife, Pat, and I also found our way to the Magpie to join them and were greeted like long-lost friends.

We asked them why they were in Harrold. They then told us about their trip up to Saltaire in Yorkshire to do a recording with the Black Dyke Mills Band. On their way back down the M1 on this hot summer’s day, they wished to break their journey, and after consulting a map, liked the sound of the name Harrold and headed for it, and here they were.

With Paul was his manager Derek Taylor, Alan Smith ( a reporter with the New Musical Express). Peter Asher (of the pop duo, Peter and Gordon, and a brother of Jane Asher, whose relationship with Paul was about to break up), and Tony Bramwell (of the Apple organisation) , who has since written a book on the Beatles.

After a while, thoughts were on something to eat. In those days few pubs served food. Pat suggested that she could provide something, so we trooped back to Mulberry Lodge, where she managed to produce a sumptuous meal. Paul showed his humanity by visiting Pat’s father, at that time an invalid in bed, and had a long chat with him. He also played a pink piano which was in the room, commenting that he had never seen one which was pink before!

We had a lovely evening of conversation and music and food and wine. Our younger daughter, Shuna, produced a child-size guitar, which Paul tuned by putting two coins under the bridge and then proceeded to play in his normal left-handed manner. He played and sang throughout the evening and then told us he had a new song- not yet recorded – called “Hey Jude”, which he sang several times. Shayne, our other daughter, was so unfazed by what was happening that she retired to bed to read a book! 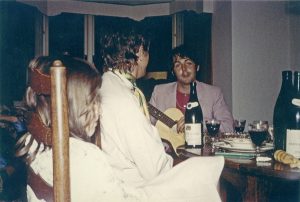 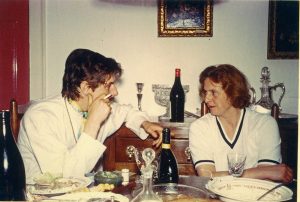 We had long chats about his life as a pop star and what it was like to be so famous and so well off so early in one’s life, and he related some of the difficulties it was creating for him. 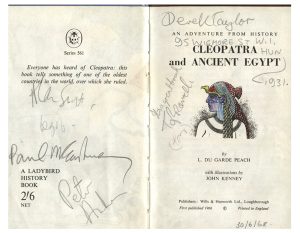 They all were the nicest people one could wish to meet, and great fun, and it was a very special evening. Pat, in particular, always felt great respect and affection for Paul and took great interest in his career and life, until her death in 2002.

After many hours, and well after midnight, they suggested that perhaps they should think of returning to London, so, not having any idea where their Rolls Royce and chauffeur were, we walked back up the High Street and there outside the Oakley Arms was their car.

Frank Evans, the landlord, his wife Jean and their daughter Tessa had been told by the chauffeur who his passengers were, and knowing that they had to return to the car, they kept the pub open. Then followed another session of Paul on the piano singing Beatles songs. Eventually, perhaps at about 3 am, they trundled out to their car and we bid them farewell after a magical evening.

A few days later, we received a letter of thanks signed by them all (except Alan Smith) and also received a gift of two bottles of champagne for the bottle stall at our Playing Fields Association fair on the following Saturday, which were duly raffled.

Alan Smith wrote an article for the New Musical Express about the weekend, which was for years framed and displayed in The Magpie.

Derek Taylor devotes two pages to the visit in his book “As Time Goes By – Living in the Sixties”. This is reasonably accurate, allowing for the fact that he is recollecting events through a haze, as he says himself, of a certain Dr Leary’s medicine. Tony Bramwell and Rosemary Kingsland, in their “Magical Mystery Tours – My Life with the Beatles”, make a brief and not totally accurate reference to the evening.

We simply regarded it as a very special evening, and weren’t much aware until decades later that the Harrold visit had been written about so much, and had inspired such interest.

Despite several requests to give interviews and appear on television, we have avoided and resisted, up to now, to give any publicity to this special evening. I have now considered it prudent to write down what happened so that an accurate record exists.

The events of the evening are poignantly summarised in the treasured letter copied below: 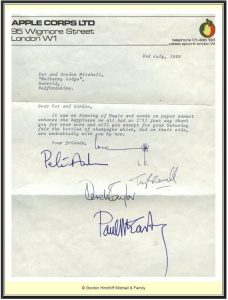