The de Morin family succeeded the de Blossevilles as lords of the manor of Harrold. Simon de Blossevile made over the title and four hides of land to Ralph de Morin in 1232. Ralph Morin (the Elder) appears to have been born in Harrold and married Albreida de Braose, the great grand-daughter of the original Domesday lord of the manor of Harrold, Gilbert de Blosseville.  Albreida de Braose had an even more illustrious ancestry, including William de Braose the powerful Norman baron and, further back, Richard III, Duke of Normandy and his wife Adela, daughter of the King of France (Robert II).

Thus the de Morin family were moving back up the social scale and were continually increasing their land holdings in Bedfordshire and in neighbouring counties. Ralph de Morin the Elder was Sheriff of Northamptonshire, indicating that he had significant holdings there. .Ralph Morin also owned land in Ravensden between 1195 and 1207 which included Morinsbury Manor, the site of an iron age hill fort and which, in Medieval times, became a moated fortification. The site is now marked by Putnoe Wood and part of the golf driving range of Mowsbury Park. The name Mowsbury is a corrupted name for Morinsbury. The land was eventually owned by The Tyringham family of Hinwick (until the late 15th Century).

However, it does seem that Harrold was the family’s main base during much of the 13th Century. Ralph de Morin the Younger was born here in 1217. His father paid (in 1194) sixty two shillings and a penny to the sheriff as half a knight’s fee and by 1235 this had become two knight’s fee (meaning he would pay the Crown the cost of two fully armed knights per year. Accordingly, his son was referred to as Sir Ralph de Morin. By 1278 the Harrold manor had two watermills (only one in the Domesday Book). Soon after that date the land holding and lordship of the manor was alienated to John de Grey. 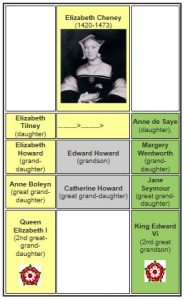 The daughter of Sir Ralph married John de Pabenham in 1246 and thus continued the family’s local land holding tradition. Their descendants through the Pabenhams and Cheneys included three wives of King Henry VIII (Anne Boleyn, Jane Seymour and Catherine Howard), the first Queen Elizabeth and her younger brother, King Edward VI. The common ancestor of these five people was Elizabeth Cheney (Sir Ralph Morin’s 5th great grand-daughter). She married Frederick Tilney then John de Saye. Thus within 10 generations the descendants of de Morin family of Harrold had moved from country squires to monarchs of the realm.