William Covington was perhaps one of the best known of the Harrold clockmakers. This cottage industry developed in the Eighteenth Century when  local craftsmen set up small workshops or worked at home. Sometimes it was farm workers who made good use of the winter months. Some were apprenticed elsewhere in Bedfordshire and some even had apprentices themselves.

William Covington was not born in Harrold but in nearby Turvey in 1719. His father was Peter Covington (1679 to 1744) the Turvey blacksmith, a trade that went back in the family over at least 3 further generations to late Elizabethan times. The family business of working with metal was obviously good preparation for working with much smaller and precision parts of making clocks.

William’s mother was  Judith Williamott. In 1743 he married Elizabeth Killingworth (born in Cold Brayfield in 1718) in Turvey church . Soon after this the couple moved to Harrold where each of their four children were baptised in St Peter’s Church between 1744 and 1756. We do not know why William moved from Turvey to Harrold, but it may be that the clockmaking industry was already embedded there or it could have been that other Covingtons were already living in the village and had been for more than 150 years. However, we do not know what was the relationship between the Turvey and Harrold  branches of the Covington family. William Covington’s namesake had left Harrold to become an early settler in the colony of Virginia a century before.

William obviously gained a reputation for his clockmaking skills and his workmanship was enduring . One clock is still to be found in private ownership in the village, another is to be seen in the West End Baptist Meeting House in nearby Stevington, a parliament clock clearly marked “William Covington Harrold” and we have heard of others being bought or sold.

After about fourteen years in Harrold, William moved in about 1758 to Hitchin in Hertfordshire and eventually to Stony Stratford, Buckinghamshire. He carried on his trade in these places and was succeeded in the business by his son John in the early part of the Nineteenth Century. 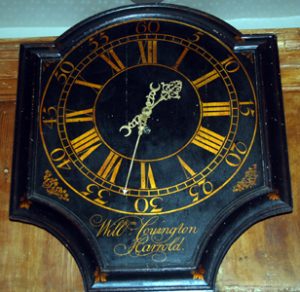 The parliament clock was made by William Covington c. 1750 and has stood in the West End Baptist Meeting Church in Stevington for over two and a half centuries.