Fairs and markets took place at market towns and villages, and would last for several days, sometimes weeks. Booths were erected in the streets, and people from all around came for finery and ornaments, to make themselves the “observed” of all observers in their small community.

In Harrold on Sunday afternoons after morning service, people would assemble on The Green and play at quoits or football. But the favourite and most dignified sport was archery. Every village had its crack shots, with either the long or the cross bow, and on May-Day the archers from several villages around would meet at some suitable spot, such as the slopes below Chellington Church, to contend in a championship.

To these contests came not only Sir Ralph Morin and his family, but the Wahulls, Lords of Odell, and the Pabenhams, from Pavenham. It was thought well to encourage this sport, for archers were indispensable in warfare, and English archers were renowned for their strength and skill. The crowning feat was to split a willow wand at a distance of fifty paces. After the shooting there were games, quarter staff, morris dancing, and jigs, and all joined in.

Harrold Green has been used for many events and functions over the years, more recently for the Merrie England Fayre, the Pit Run and other village gatherings. 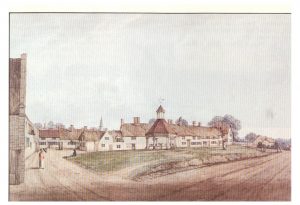 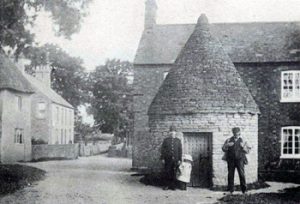 The 18th century Market House, or “Buttermarket” stands as an architectural and historical landmark, as does the circular “Lock-up” or prison, built in 1824, which has provided custody for villains for a night, or to stand trial, and more recently, in 1967, the voluntary two-day incarceration of Georgie Knight, for a wager.