The Domesday Survey started at William the Conqueror’s Christmas Court of 1085. During 1086, Royal Commissioners were sent out to every shire with a long list of questions: who had owned this manor before, who owned it now, where was the meadow, who fished in the eel pond, how many men did the town supply for the king’s ships, and how many horses for his army? The king died before the survey was complete. A recent review of Doomsday has noted some 900 years later that over 90 percent of the towns and villages in the original survey are still there, but for the majority there have been major changes since.

For the village of Harrold The Domesday entry comes in the Bedfordshire section under the heading “Land of Countess Judith” The Latin text appears as below. 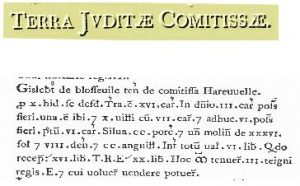 The above translation is that of Abraham Farley (published in 1783) and was taken from “The Domesday Book: Bedfordshire”, edited by John Morris and published by Phillimore (1977)

Countess Judith was the daughter of Odo, Earl of Champagne, and Adeliza, half-sister of William the Conqueror, and wife of Waltheof Earl of Huntingdon, Northampton, and Northumberland. Judith’s possessions included Harrold, but also lands and manors in 10 counties, including 24 manors in Bedfordshire. At the time of the Domesday survey she was recently widowed (as a result of Earl Waltheof’s execution following his involvement in a rebellion against the King (his wife’s uncle).

The greater part of these vast possessions formed what was known as the Honour of Huntingdon. William the Conqueror offered his niece, Countess Judith, in marriage to Simon de St. Liz. But she rejected the alliance, apparently owing to St. Liz’s “halting in one leg”, and anyway preferring to make her own choice.

This refusal so displeased the Conqueror that he seized upon the castle and Honour of Huntingdon, exposing her and her daughter to a state of privation and obscurity. But de St. Liz, thus disappointed in not having obtained the hand of the Countess of Huntingdon, made his addresses with greater success to her elder daughter Maud, who became his wife, and William conferred upon him the Earldoms of Huntingdon and Northampton.