The public houses in Harrold, as in any village, have played a notable part in the life of the village. Harrold’s present pubs have now been reduced to just two), The Muntjac (formerly The Globe) and The Oakley Arms.

The Globe was first licensed in 1845. A notable feature in the restaurant is the well, which when it has been illuminated provides an interesting view of the clear water, and the fish which live in it. In 2003 The Globe was renamed as The Muntjac, following refurbishment.

The Magpie, first licensed in 1869, was recently closed when it belonged to Charles Wells, formerly Wells and Winch.

The Oakley Arms, formerly known as The Blacksmiths Arms, was first licensed in 1869. For many years this pub had the unofficial name of Dan’s Place, after Dan Orpin, who became landlord in 1919, continuing until the mid-1950s.

Historically, the prominent inn or pub in a village sometimes doubled, for example, as a magistrate’s court, corn exchange, auction room, or mail collection and delivery point.

This was so in Harrold at “The Wheatsheaf”, which many still remember, as it closed only in September 1974, and is now a private house. The Wheatsheaf stood at the corner of The High Street and Dove Lane, and was established by 1830, and at that time when many other pubs were being opened in Harrold, most of which no longer exist. In 1839, during the evolution of postal services in Harrold, the Post receiving house was at The Wheatsheaf, Benjamin Lever being the receiver and also the Excise Officer. 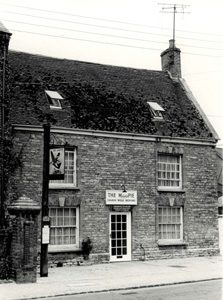