The gentry were attracted to Harrold by the dissolution of the Priory, and especially the Farrars. However, although the Farrars built two houses suitable for their status, their land holdings were divided by death and marriage. Terriers of 1594 and 1607 show that the Farrar Mansion, now The Old Manor, was built between these dates, probably being completed near the latter. It was built for Thomas Farrar, second son of Ralf Farrar, the purchaser of the Priory subsequent to its dissolution.

In 1630 the Farrars purchased land in Cold Brayfield and Newton Blossomville, and moved there. The Farrar Mansion was let to George Orlebar in 1653, and then sold to the Rev Thomas Faldo in 1684.

In the Harrold Centre there is a print of an original drawing presented by Harrold Parish Council to the “Institute Hall” in 1901, which shows a 16th century H-shaped house. Of this only one of the end wings remains today. It is a stone building with mullioned and transomed windows, and has a tiled roof. In a room on the ground floor is a fireplace with the Farrar arms carved in oak panelling over the mantelpiece. 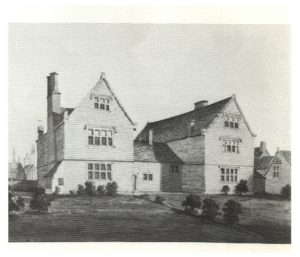