Caleb Lefevre was another notable and interesting resident of Harrold. He provided us with fascinating insights into a prominent local tradesman, and was himself an inventor.

Caleb was born in a house on Harrold Green, now number 5, and died in the same house 88 years later. Although he only attended the village school he became a respected man. He was a strong supporter of the Congregational Church. What singled him out particularly was that he was an inventor and had a patent and a patent application to his name.

When he was born in 1851, son of Caleb senior (who was born in Kimbolton) and Eleanor (born in Hinwick), the family name was Fever. His father’s business in Harrold in 1861 was that of butcher and farmer, with extra duties as a jobbing smith and way wardener.
In later years Caleb junior inherited the butcher’s shop, while William, one of his four brothers, became a dispensing chemist and dentist, and was a Member of the Pharmaceutical Society of Great Britain. Caleb Fever, being now the local butcher, and his brother the chemist, considered that such a name might reflect adversely upon his trade, and so he reverted back to the family’s original name of Le Fevre.

The following information was added in 2007 by Caleb’s great, great niece, Lesley Milne, who visited Harrold a little while ago to attend the Le Fevre family reunion.
“Of Huguenot origin, the family was one of a large number of French Protestants settled in the area previously brought in by the Duke of Bedford for draining the land (the Bedford Levels, draining the marshes of the Fens were financed by the Duke).They came in many years before Caleb (born 1850), with the family name of Le Fevre, anglicising it to Fever.”

Caleb’s elder brother George born 1848, was a medical doctor who studied under Sir Joseph Lister at Edinburgh. George lived in Melbourne and was an M.P. with a large medical practice in Collins Street. He died aged 43 of typhoid in Glasgow having returned to put his 17 year old son into medical school. His death left his children orphaned. Two of George’s sons became medical doctors, one in England and the other in Australia.

Caleb’s eldest sister Sarah was educated in France and taught there. She made her own wedding veil in Harrold lace

The French flag was flown over the family butcher’s shop on Queen Victoria’s Diamond Jubilee.

The Le Fevre family is still in Australia and now Catholic. 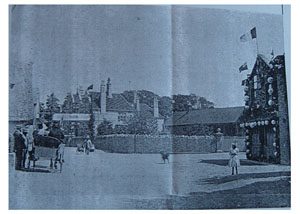 This picture was also sent to us by Lesley Milne and was a newspaper cutting (possibly Wellingborough News) of a photograph of Queen Victoria’s Diamond Jubilee celebrations in Harrold in 1897. The photograph had been submitted by Mrs E Manton of 124 High Street, Harrold. It shows Caleb Le Fevre’s butchers’ shop, highly decorated and proudly flying the Tricolor and also The Australian flag.