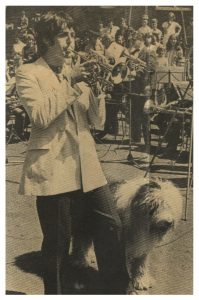 It was actually recorded on 31st July 1968 at Trident Studios, London. Its release was on 26th August on the Apple label and was produced by George Martin and engineered by Geoff Emerick. Paul McCartney was the lead singer and played the base guitar and piano. Background vocals were provided by John Lennon (and also acoustic guitar), George Harrison (also lead guitar) and Ringo Starr (drums and tambourine). In addition there was a 36-piece orchestra with most of the members contributing towards the famous “na-na-na” chorus.

“Hey Jude” was the longest of the Beatles’ tracks at 7 minutes and 11 seconds. It was the Beatles’ most successful US singles hit (9 weeks at Number One) and in Britain was in the charts for 19 weeks.

Hey Jude was composed by Paul McCartney in June 1968 as he sang while driving north to visit the estranged wife of John Lennon, Cynthia, and their son Julian (the song was thought to have been originally dedicated to Jules, rather than Jude). A demo tape was produced and shown to John Lennon who agreed that he and Paul should collaborate in the final composition.

The song was obviously still embryonic in Paul’s thoughts, when in that very same month he arrived in Harrold, having been to Saltaire, Bradford to record with The Black Dyke Mills Band. The Beatles Diary: From Liverpool to London By Barry Miles gives the movement of Paul McCartney during that period and actually states that the premiere of the Hey Jude was in Harrold on 30th June

There are many versions of the visit made by Paul McCartney on that June Sunday in 1968. It has been variously reported by local newspapers, music magazines and even by New Zealand Television. There is rivalry between the Magpie and Oakley Arms pubs as to where the particular events took place. The locals are somewhat divided too. Two accounts are included below and it is hoped that other witnesses will come forward to give their versions. Whatever the truth, the story is a good one. 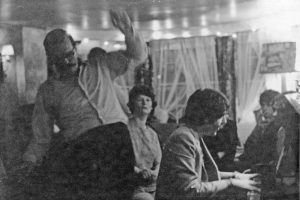 A Hard Day’s Night in Harrold
Tony Bramwell, who had accompanied Paul McCartney and entourage, including Paul’s Old English Sheepdog, Martha, en route from the north of England wrote a few years later:

“On a Sunday afternoon in June 1968…we set off back to London. Getting bored with non-stop M1, Paul suggested we pull out the AA Book and find a village with the nicest name…and pop off the motorway for a change of scenery. After a short time Harrold in Bedfordshire was spotted…and a detour was made. On entering this pretty little village, we spotted a gent who was trimming his hedge and he looked suspiciously at the Rolls as we drove past. We went through the village without seeing anyone on this lovely afternoon, turned round and asked the gent if there was a tearoom or pub open, but he said not. Recognising Paul, he invited us into his home to have some tea and told us that the pub would be open shortly.

He told us that he was a dentist practising in Bedford, and he introduced his wife and children who seemed perfectly at ease that a Beatle should drop in for Sunday tea! We then went along to the pub with Paul and were greeted very warmly by the landlord and were made to feel very welcome. Pretty soon the whole village seemed to appear in the pub and it looked like things might get out of hand, so we went back to the dentist’s house and opened a bottle of wine. His little girl brought out a guitar and Paul sang some of his new songs to the gathered family, including one he had just finished called “Hey Jude”.

We were then told that the pub had been cleared of all but the real locals and we were invited back for a quiet drink after hours. Paul was pretty swiftly sat at the piano and he played a selection of standards and Beatles’ classics as the locals sang along.

At about three o’clock in the morning we quite drunkenly climbed into the car and were then driven back to London. During the following week we sent up some records and champagne to be raffled at the Church Fete”

This Miniver Settlement
“We wound through Bedfordshire checking off the signs steadily until we reached the village sign. Harrold. Oh it was a joyful sight.

It was the village we were supposed to have fought the world wars to defend, for which we would be expected to fight the third when told to, but won’t. It was a Miniver hamlet on the Ouse and there were notices telling of the fete next Saturday and a war memorial which made me weep.

Thrushes and blackbirds sang and swallows dived into thatches and a little old mower wheezed as we walked down the only street there was past the inn which was closed and the church which was open nodding to a sandy man with 1930s moustache and khaki shorts as he clipped his hedge and stared at these city people with funny hair and clothes.”

Derek Taylor “As Time Goes By: Living in the Sixties”

The Best Drink-up and General Night Out…
“It was also the best drink-up and general night out I’ve had since sliced bread, and my heartfelt thanks for a nice piece of living go out to Paul, Derek Taylor and Co (for the lift), the villagers of Harrold (for being real people) and to Gordon, the Irish dentist and his wife,Pat (for feeding us all at 3am with such pleasant meat and rice).”

Peter Asher
In January 2013 an e-mail was received by Harrold-on-line from sixties singer Peter Asher who was present at that night in Harrold. He stated:

” I recently happened upon the account of our visit to your excellent town in 1968. Just to say that I remember it well and with great pleasure. John Keech’s narrative seems quite right – and it was quite astonishing to see the ten bob note which I apparently signed! I see there is a dispute as to which pub we went to. I don’t remember the name to be honest, but I might know if I saw it.”

Peter Asher had a highly successful singing career and, as part of the duo Peter and Gordon, had nine top twenty records, including “World Without Love” He followed this with an even more successful career in music and entertainment management with the Apple label and later Sony