St Peter’s Church, with its handsome Gothic spire, contains memorials of the families of Boteler and Alston, a monument of Mrs Jolliffe, daughter of Lord Crew, and the tomb of Mrs Anne Mead, daughter of Sir Rowland Alston of Odell, and wife of Dr Richard Mead, the celebrated physician.

The parish had been exonerated from tithes, in consequence of the Inclosure Act of Parliament passed in 1797. 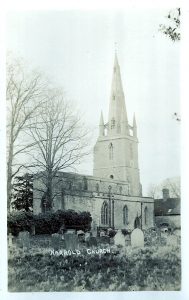 d Vicar of St Peters was Eudo, appointed in 1226 by the Prioress of Harrold Priory.

The Priory had an important bearing on Harrold and its church from Norman times.The Church formed part of the original endowment of the Priory, thereby reducing the status of the parish incumbent from Rector to Vicar, and was retained by the Prioress until 1536, when the Priory was suppressed by King Henry VIII. The rectorial tithes and advowson of the vicarage followed the same descent as the site of the Priory, passing to the Farrar family.

Between 1710 and 1734 the patronage was transferred from Willam Farrar to the De Grey family, who owned the manorial rights and land in the village, but alternated between these two families as their interests varied. More recently it was acquired by Balliol College, but is now held by the Bishop of St Albans.