The census returns for Harrold Hall in the earlier part of the Victorian age (1841, 1851 and 1861) reflect the great contrast in that society. The residents and visitors are drawn from aristocratic landowning families (with mainly Irish connections) and the large staff of domestic servants  resident at the Hall (with some Irish connections too).

The head of the household in this period is Major Richard Magenis (absent from home in 1841 as was his wife, Maria). Variously present too are his nephews, the Earl of Belmore (1851 & 1861), the Hon. Armar Lowry-Corry (1851),  and Viscount Cole (1861),  his daughter, Elizabeth Magenis (1841), together with a house guest, Captain Georges (in 1861). Who were these people and why were they variously living or visiting Harrold Hall?  The answers to these questions revealed some interesting stories of people with Harrold connections. 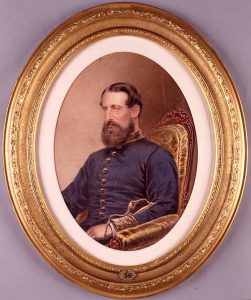 Somerset Lowry-Corry, 4th Earl of Belmore was present at Harrold Hall in both 1851 and 1861 so there must have been strong ties with the Magenis family. In 1851 he was just 15 and was probably then still a pupil at Eton. Ten years later, and after graduating from Trinity College, Cambridge, he had embarked on a political career as an elected representative peer for Ireland in the House of Lords (1857- 1913). He served in the government of the Earl of Derby as Under Secretary of State in the Home Office and by 1867 he was appointed Governor of New South Wales.  Somerset Lowry-Corry was the eldest son of the 3rd Earl of Belmore, Armar Lowry Corry, and his wife, Emily Shepherd. He was born in Bruton Street, London in 1835 and by the age of ten his father had died and he had inherited the earldom and the family seat at Castle Coole, Enniskillen, County Fermanagh. He married Honoria Gladstone (niece of William Ewart Gladstone, the future prime minister) in 1861, just a few months after he was recorded at Harrold Hall in the census.

Soon after his appointment as Governor of New South Wales he was accompanying Prince Alfred, Duke of Edinburgh, to an official picnic in a seaside Sydney suburb in March 1868, when an assassination attempt took place. The Prince was shot in the back by a Finian gunman, Henry James O’Farrell and although he recovered he spent a long time recuperating in Australia before he could return to Britain. The would-be assassin was tried and subsequently executed despite pleas for clemency by both the prince and Belmore. Some time was spent in handling sectarian tensions in the colony before Belmore returned to Ireland in 1872. There he continued to serve as a representative peer in the House of Lords, a position he held for almost half a century. He died in 1913. Castle Coole, the Belmore family seat in County Fermanagh, has now been recently restored  by the National Trust. Prince Alfred, Queen Victoria’s second son, died in 1900, having inherited the title of Duke of Saxe-Coburg-Gotha seven years earlier.

The Hon. Armar Lowry Corry was present at the Hall in 1851, aged 14. He was the younger brother of the Earl of Belmore and was also a pupil at Eton. As the second son of the family, he typically entered the Royal Navy and like his father he reached the rank of Rear Admiral.He married Geraldine King-King in 1868 and they had 12 children. He died in 1919 at the age of 83.

Viscount Cole (who was present at the Hall in 1861 aged 15) was Lowry Egerton Cole who had inherited the title at the age of five and was later to become the 4th Earl of Enniskillen. He married Charlotte Marion Baird in 1869. The following year he was involved in a major Victorian scandal. He and another socialite, Frederic Johnstone, were each cited in a divorce case by Sir Charles Mordaunt for adultery with his wife, Harriet. The Prince of Wales was also mamed and this caused a sensation as he had to appear in the witness box. The divorce was denied on the grounds of insanity of Lady Harriet , but it erupted again when the issue of paternity of the daughter Violet was raised. Viscount Cole did not contest the assertion that he was the father. Sir Charles Mordaunt was eventually granted a divorce in 1875. Lady Harriet Mordaunt was confined to a lunatic asylum for 35 years.

Lowry Egerton Cole was elected to the House of Commons in 1880 where he sat as a Conservative MP for Fermanagh until the constituency was abolished in 1875 and the following year his father died and he inherited the title of 4th Earl of Enniskillen. He then entered the House of Lords. He died in 1924 at the age of 78. 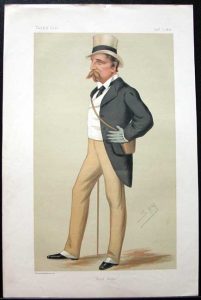